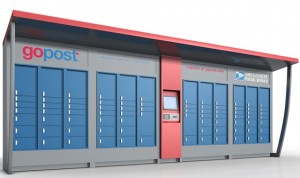 The U.S. Postal Service plans to start testing its own locker system for packages, similar to the lockers that Amazon.com has been rolling out on a trial basis, according to a report this week by the Courier Express & Postal Observer news site.

USPS will test the system at a variety of locations in Northern Virginia under the name “gopost,” according to the site.

What if the USPS placed these lockers in high density areas, areas that had access to a warehouse nearby?

Could the USPS do same day delivery of items from a warehouse a few miles away to a locker close to where you live or work?

What kind of premium could be charged for such speedy service?

Would people value it enough for the USPS to make money?

Time will tell if something like a more centralized delivery system could work. For a while I’ve thought that the USPS would put some sort of locker-box (Like the ones apartments have) up the street for the 50 or so house on this block. Mail could probably be delivered in less than 15 minutes for the whole block rather than what is probably an hour now. Certainly there would be much less walking for carriers. The USPS delivery vehicle could probably be parked less than 25 feet from the locker-box and perhaps as close as 5 feet.